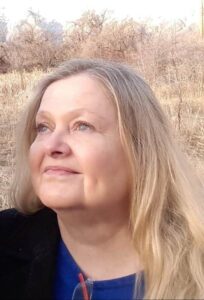 It is with the heaviest of hearts and deepest sorrow that we announce that our beloved wife, mother, sister, daughter, aunt, cousin, and grandmother, Gail Baddley, passed away in Dillon, Montana, following a brief battle with the Coronavirus on November 3, 2021, with her husband at her bedside.

Gail was born on April 13, 1955, in Lyons, Georgia, the eldest daughter of Mildred Powell and Leonard Graham. She was a beautiful child and spoiled by her large, tight-knit Southern family. And, as a native Georgian, she grew up with a fierce pride in her Southern roots and heritage. Often, she would tell of going on moonshine runs as a small girl with her grandpa on the Georgia back roads and laughed about the times her Granny Powell would point at her belly button, saying, “That’s where the Yankees shot you.”

After graduating from Mount Vernon High School in her hometown of Mount Vernon, Georgia, in 1973, Gail lived in the Chesapeake, Virginia, area for a number of years. In 2000, she returned to Mount Vernon to be near family again and to raise her daughter, Hannah. Gail worked a variety of jobs during this period of her life which included being a travelling photographer, raising racing greyhounds, working as a florist, secretary, and county clerk. But her favorite job of all was as a mother to her precious Hannah.

Gail was a very artistic and creative person. Throughout her lifetime she was involved in a number of hobbies and pursuits such as photography, sketching, flower arranging, interior decorating, live theater and singing, Native American spirituality and drumming, and anything to do with bigfoot/sasquatch. She loved camping and being outdoors, anything to do with nature.

After a whirlwind long-distance courtship the previous three months, Gail married her soulmate, Terry Dean Baddley, in a “Gone With the Wind” themed ceremony in Long Pond, Georgia, on April 8, 2017. She had always dreamed of dressing up in a hoop skirt like the Southern belle she was with her very own Rhett Butler and she got her wish that day!

It was the beginning of a non-stop adventure that lasted the four-and-a-half years they were married. Their honeymoon was a scenic 2,400-mile drive that took them through the states of Georgia, Tennessee, Kentucky, Illinois, Missouri, Kansas, Colorado, and finally Utah. The newlyweds made their home in Brigham City for the next two years. During that time Terry became Gail’s personal tour guide to the Rocky Mountain West. Everything was so new to this girl from Georgia and she found beauty and wonder wherever she looked in her new home. The mountains of Utah became their new playground, especially the Uinta’s. Terry also introduced Gail to the wilds of Idaho and Wyoming, but when he took her to Montana, she knew that she’d found her dream destination.

After Terry took her to her first Grand Victorian Ball in Virginia City, Montana, where she could step back in time to the 1860s and dress again in her hoop skirts and dance the Virginia reel, Gail enthusiastically joined Terry in his dream of someday making his home in this part of Montana. But she wasn’t content to have it be only a dream and Gail went to work on making their move a reality. In February 2019, Gail convinced Terry to retire early and sell their Brigham City home. And on May 1, 2019, the two adventurers bid farewell to Utah and relocated to the Ruby Valley of southwestern Montana, buying a home in the tiny rural town of Laurin. It was the ideal location for them and for the next two-and-a-half years they spent their time exploring the Ruby and Tobacco Root Mountains near their home, being part of Living History events in the ghost town of Bannack and Virginia City, and enjoying their quiet and rural lifestyle.

Everyone who knew Gail absolutely loved her. She was an amazing woman — smart, funny, talented and exhibited the charm of a true Southern belle. Gail had a genuinely loving and true heart and an inner light that we all loved to bask in. She could walk into a room of total strangers, but by the time she left she’d made each of them a friend for a lifetime.

Gail was preceded in death by each of her grandparents, step-father Royce Curl and brother Len Graham.

Services for Gail Baddley will be held on Monday, November 29, at Myers Mortuary at 205 South 100 East, Brigham City, Utah.

A viewing will be conducted from 12:30 to 1:30 p.m. with funeral services to follow at the mortuary at 2:00 p.m. All friends and family are invited to attend.

Burial will be in the Willard City Cemetery.

For those wishing to view a live stream of the service, go to the bottom of Gail’s obituary on Myers Mortuary website at www.myers-mortuary.com, where you can also leave condolences for the family.

The family wishes to thank the Ruby Valley Medical Center in Sheridan, Montana, and Barrett Hospital and Healthcare in Dillon, Montana, for their compassion and treatment during Gail’s valiant, but brief battle with Covid.