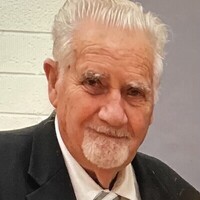 Pinkney Harry Head, Jr, 91, born July 25, 1930 passed away on Tuesday November 16, 2021 with his wife and children by his side. Harry was a resident of Malad City, Idaho for 46 years. He was born in Farmington New Mexico to Pinkney Harry Head Sr and Stella Dell Bently and was the oldest of 9 children. He was raised and educated in Farmington NM and Sanford, Colorado. He attended Sanford High School in Colorado where he excelled in Football as the Quarter Back, Basketball where he played Center and ran track. Under his leadership his teams took State Championships three years straight.

As soon as he graduated high school he joined the Navy to serve in the Korean War efforts. He was stationed in San Diego, CA Mira Mar Naval Base. While stationed in San Diego, he met the love of his life, Beverly Joan Gallagher, at an ice skating OR roller skating rink…. Depends who was telling the story. Three months later on May 19, 1953 at 12:00 noon they were married in the Mesa Temple in Arizona. Their first home was in San Diego, California where they had 6 children. In 1967 the family moved to Kailua, Hawaii where he started up a successful construction company.

Harry was an active member of the Church of Jesus Christ of Latter-day Saints. He served as Stake Mission President in the San Diego Stake and then in Hawaii in the Honolulu Stake and then the Kaneohe Stake. Missionary work was so important to him because he wanted everyone to know of our Father, Gods Love for them.

After their 10 beautiful years spent in Hawaii, the family moved to Malad City, Idaho in 1975 where he continued in his construction business. He loved fishing, missionary work, and spending time with his family he love so much. He was a loving and quiet man who will be missed by many.

He was proceeded in death by his grandson Benjamin Padovich, his parents, 3 sisters and two brothers.